In the era of the cost of development and public services converging towards or competing with global prices, along with public revenue streams heavily strained, the fiscal firepower left with policymakers and executives in India is grossly inadequate.

Though grossly under-funded our activists and public servants work with extraordinary zeal towards community development, but sometimes not so right kind of skills and worldviews along with highly competitive rolling election system (States, Municipal, National keep taking place almost every now and then like IPL) wouldn't let build a strong (read not so popular) consistent and long-term development plan.

This leads to long drawn policy-making process (Real estate bill, GST, land reforms, Judicial reforms as examples) and inconsistent implementations on the ground due to the pretty much non-existent cash-strapped regulatory framework. 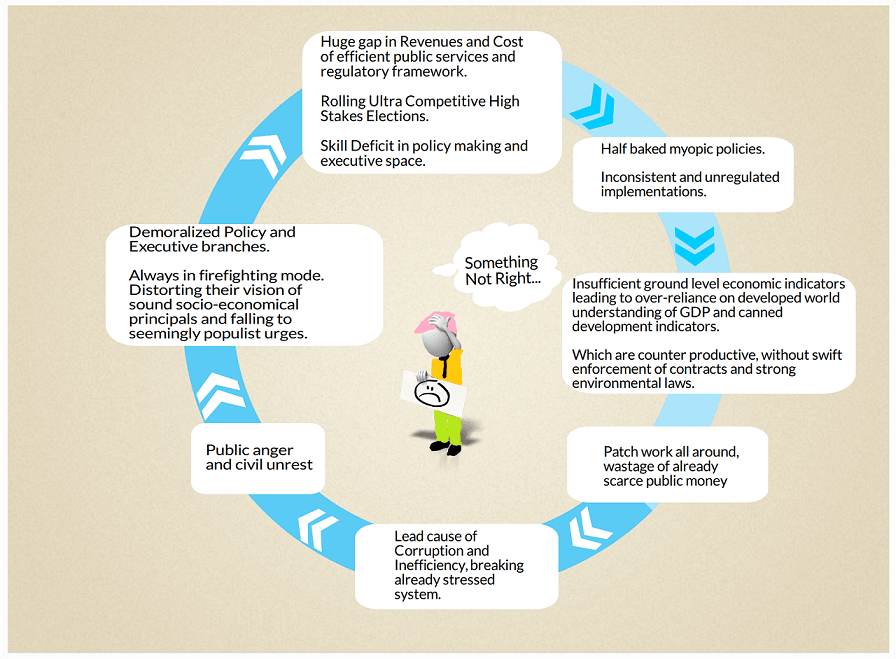 The situation right now looks like the image above, a self-enforcing national poverty trap.

What do we want to achieve?

Let's start with what we already know, add a bit of research and find out why a middle-class household is so pissed off and what can be done about it, so the dream of living happily ever after in India is not a dream for generations to come.

Let's put this in perspective and compare with a benchmark nation USA.

The USA has its own problems, but let's focus on India.

So Central Government has $267(Rs. 16000) per person to run government legislative, executive and Judicial branches, their department & ministries totaling close to 4000 (umbrella bodies, at least). Run welfare schemes (schools, health), defense, build roads and infra, and also take vanity projects (will keep touching this, but later). To put that in perspective, in Gurgaon if you live in a small community's 1500 Sqft. apartment you pay close to Rs. 4000 for maintenance, it's a skewed reference but just to give an idea.

Now what happens is, good folks in Government try to implement the welfare programs with whatever small budget available and assumptions, looking all good on paper. The money burns out simply implementing half-baked services, leaving no regulation or oversight in the picture. This breeds corruption, chaos and a general dissatisfaction with public breaking trust in government. This is pretty much the case right now.

In political folklore, corruption is sung as the main culprit for all the ills of India, but corruption is just a symptom, like a runny nose with swine flu.

Now to our earlier question, why a decent service class citizen is so pissed off, above does give a fair idea, but there is more to it. Lets retro-inspect how the world got their wealth, and why we are so cash-strapped.

Getting back to more data points. Below is slab wise % of tax returns and income declared in 2014.

Looking closely into the less than 20 Lacs vs More than 20 lac slabs.

But then we looked at above table closely, if we are missing anything. There is something which doesn't add up to reality on the ground.

We know that 98.9% population doesn't report or pay taxes, but a quick look at India's car sales data between 2001 - 2011 we got close to 10 Crore Cars registered across India along with a plethora of other vehicles totaling close to 101 Crore in number, this includes two wheelers and miscellaneous vehicles as well(so some impurity) but still gives an idea that tax net should be bigger than current 1% under direct tax.

Then we looked at top 0.1%. Based on our experience of working in India, the current prevalence of contract labor, stagnate wages, we can argue anecdotally, labor income is not a huge part of production and services in India, capital Income is still the king. And anyway we are the cheap labor destination.

First of all, as per Forbes 2014 list of 100 richest Indians, $346 Billions of Forbes reported private wealth is shared between some 100 individuals, which comes to Rs. 20778 Billion. Now as we know the rate of return goes really up with the amount of capital at hand. Rich folks have really smart money managers at disposal and access to avenues increasing capital at a much higher rate than an average folk. But let's just use 10% (close to highly conservative FD rate) and we are looking at Rs. 2077.8 Billion(Rs. 207780 Crore) of very conservative capital gains income for this very small group of people. Now if we look at the income declared by last 354 persons from ITR data its Rs.17390.22 Cr., which is 80.4% of 2014 Forbes reported and very conservatively calculated the Capital income of just these 100 individuals.

Another data point worth mentioning is, in recent news media reports from respectable sources of more than 2.5 lacks dollar millionaires are in India and growing really fast in the number as well as the private wealth. So this number of 354 individuals reporting at the top of the income chain also doesn't look right.

So apart from getting the 98.9% of the population under tax net if we get just 10% (has to be way more due to more capital higher returns principle, tough to get hold of that data though) of Forbes or similar reported incomes as taxation from the top 1 centile, the middle class wouldn't be under stress any more. The burden of indirect taxes would be wiped out at least leaving some space for him to breath, spend some more time with his kids, Involve more in the community leading to a generally happier population with a positive impact on GDP.

But before we build any perception about the top 0.1% and bottom 98.9%, let's look at the history to find out the reason, is there something else below the surface.

Historically after Industrial Revolution and world war 2 the western world (USA's example below) started huge nation-building exercise, a few highlights of the process were.

So when we see everything is in relative order in the USA, 44% folks paying taxes a seamless machinery working, people respecting their contracts leading to a fair and open market. It happened 'cause the policymakers took right and tough decisions at right time and a trust were built into the general psyche.

At this point in time, we are also building the country, as the west was aggressive during post World War 2 era. But the world has changed now and India is way more diverse than the West and its way more behind the curve in pretty much everything. We missed Industrial revolution and related innovation, being a colony many generations were left out of the pursuit of knowledge in favor of education pivoting around colony sustenance. We are way more densely populated with lesser natural resources depleting really fast.

Policymaking and legislative process to cut down the subsidies for bottom 98.9% and implement really progressive tax rates for top 0.1% as the developed world did, and being reasonable to contemporary India's growth requirement and stability is very tricky due to political compulsions, inefficient markets and no real regulations with teeth in India. Our tax system is already on the brink, any more and this 1% service class will start slipping out of tax net, in one way or the other.

We believe as a nation India will have to work way harder than west, not just copy them or China but evolve over it for our specific situation and aims.

Popular belief system has stressed a lot of expectations and a large space on responsibility spectrum to legislators (politicians), but with such a limited firepower available ($267 PP of tax dollars), implementing welfare, enforcing policy and contracts end to end for such a diverse nation really is a very high order and laden with unfair expectations. The symptoms of this stress in the legislature is really visible now with more and more emphasis on rhetoric than substance, a blitz of advertisements than actual effects felt on the ground, more argumentative upmanship and theater management than a solid track record speaking for itself.

As One senior Journalist once pointed out during last general elections.

Which translates roughly to, the speeches are sounding like a dance in which the essence is overpowered by a lot of raw movement and movements are overpowered by raw emotions. It doesn't present a pretty picture if you visualize, and can frustate reasonable folks out of politics, leaving this space hugely lacking in talent.

At BallotBoxIndia we believe, the responsibility spectrum is shared equally between Civil Society, Legislature, Executive, and Industry working in tandem with defined and advertised roles, driven by open market forces but regulated not only by legal fiat but moral responsibility, emphasis on spirit along with letters for larger sustainable and equitable growth.

Above kept us thinking what can be done, and we started looking around for green shoots, and what is the way forward to sustain progressively this community of 1.25 Billion people. Can we find a balance between regulated capitalism and open socialism to achieve the community goals?

With a view on these high stake challenges, Ballot Box India is born on below principals(Repeating from core values, for the sake of completeness).

Note - This article was written in early 2016 with data and indications from India and the USA available as of that time.

What works for India - Cooperatives or Corporates Products and Updates

What would you prefer? A company with.$6 billion in revenue, 36 lack benefactors employed in the production chain leaving alone the distribu...